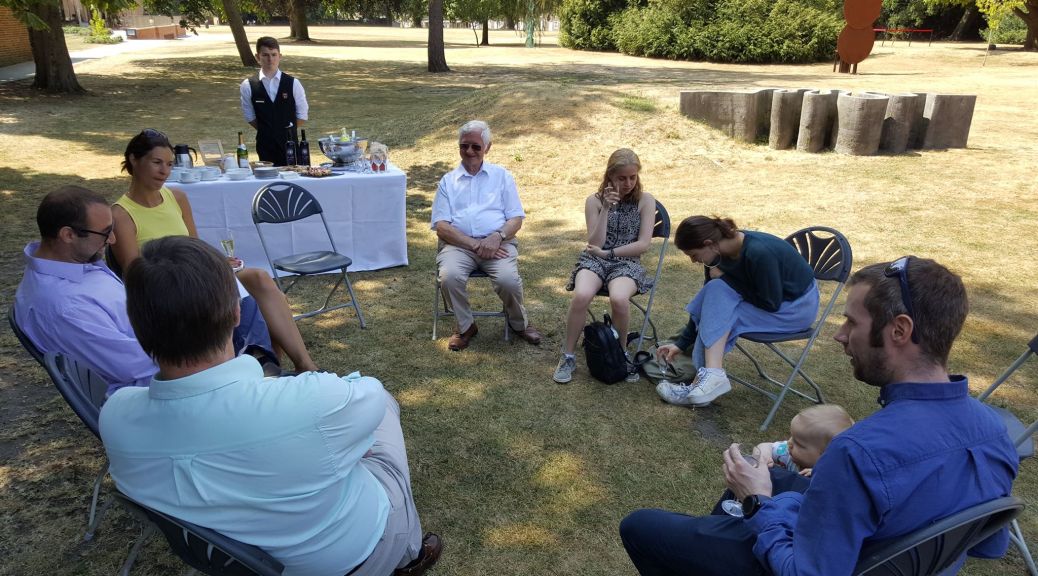 During our tax summer picnic Dr Alexis Brassey presented his paper on GAAR rules. The paper was entitled “Tax and the Erosion of the Rule of Law” and related to Dr Brassey’s PhD thesis researched at Cambridge University during the past few years.

The talk obviously started with a glass of Prosecco in the beautiful surroundings of Jesus Colleges’ Gardens. Because no one, who respects the separation of powers and the rule of law, is able to discuss GAAR without a hint of alcohol. Why is that? Because, as Dr Brassey showed, GAAR causes a substantial erosion of the rule of law.

At first, Dr Brassey explained that the rule of law, which creates the basis of the UK political system, has its roots in ancient Rome. In basic terms, the role of ROL is to restrain the sovereign from the arbitrary power; nowadays it is considered as reflected in a form of the separation of powers within the state. Here, we examined the historical evolution of ROL from an English perspective. There was a particular focus on the Magna Carta 1215, the Bill of Rights 1689 and the Parliament Act 1911.

After considering the ROL, we discussed tax avoidance. As Dr Brassey explained, tax avoidance involves bending the rules of the tax system to gain a tax advantage that Parliament never intended. It often involves contrived, artificial transactions that serve little or no purpose other than to produce this advantage. It involves operating within the letter, but not the spirit, of the law. Just to clarify, tax avoidance differs from tax evasion where the later relates to actions forbidden by law.

We discussed some important case law like Duke of Westminster case (dated 1936; established a literal approach to tax legislation) and Ramsey case (1980s; important as established a principle of purposive interpretation of tax law) that were considered as breakthrough in legal tax theory. The cases mentioned above are especially important because they are clearly related to whether anti avoidance rules can be applicable.

Finally, we discussed GAAR rules that are the central point of Dr Braasey’s thesis. The GAAR rules were introduced into the UK legal system in 2013 and they stand for the General Anti Avoidance Rules. The primary policy objective of the GAAR is to deter taxpayers from entering into abusive arrangements, and to deter would-be promoters from promoting such arrangements.

Starting with what is meant by the “abusive agreement” is just one of the problems with GAAR. The wording used in the legislation as well as its aim gives the UK government (as oppose to the Parliament) very broad legislative powers. That in turn can result in government behaving arbitrarily to taxpayers. A situation that should not exist in a country ruled by the ROL. No ROL has political and economic consequences such as loss of freedom, arbitrary power, reduction of investment and economic activity!

At the end of the talk, possibly under the influence of Prosecco, we felt more positive and all agreed that it’s good we live in a country where judges are very knowledgeable and are unlikely to abuse the anti-abusive rule. It is scary to think how that rule would apply in less liberal countries.